Most people, when thinking of a Bernedoodle, are probably thinking of the F1 Bernedoodle. F1 Bernedoodle genetics can vary a lot that will influence how they look. So, when a Bernedoodle has flattened hair, it is taking on a trait influenced from a Bernese Mountain Dog. Curly hair reflects more of a Poodle trait, a trait that implies less shedding and more hypoallergenic.

The F1B Bernedoodle generation is typically described as one of the most hypoallergenic Bernedoodle available because it has more Poodle traits and attributes.

There is a gene which can be inherited from Poodles, which is called the fading gene. It causes the color of a dog’s coat to get lighter as they age. Any doodle can fade. Because the Bernedoodle has poodle in them they do tend to fade. Bruno one of our f1 Bernedoodle studs does carry the fading gene. Some of his puppies will start out as black and turn silver, salt and pepper or bluish grey or a combination of all 3. When puppies are 6 months old, we can generally tell if a Bernedoodle puppy will fade. Personally, we think all Bernedoodles are beautiful no matter if they fade or keep their color. Bruno has faded to a beautiful combination of 4 colors, salt and pepper, silver, tan and white. Although many pet owners care about color, our primary goal is to raise healthy well-tempered pets. 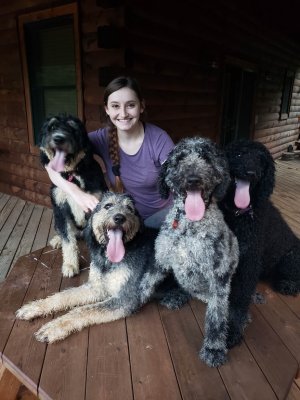